Read our latest report in our series “The UK’s HGV Driver Supply Shortage”. Kieran Smith, our CEO warns, “Brace for impact” on the chronic driver shortage the UK is currently facing.

THE ANSWER TO THE UK'S HGV DRIVER SHORTAGE

This extension to the Driver Require Think Tank's first report on the critical HGV driver shortage, focuses on the longer-term issues of the aging HGV driver workforce and the severe depletion of the younger HGV driver pool, which presents a serious and immediate threat to the UK Haulage Sector. 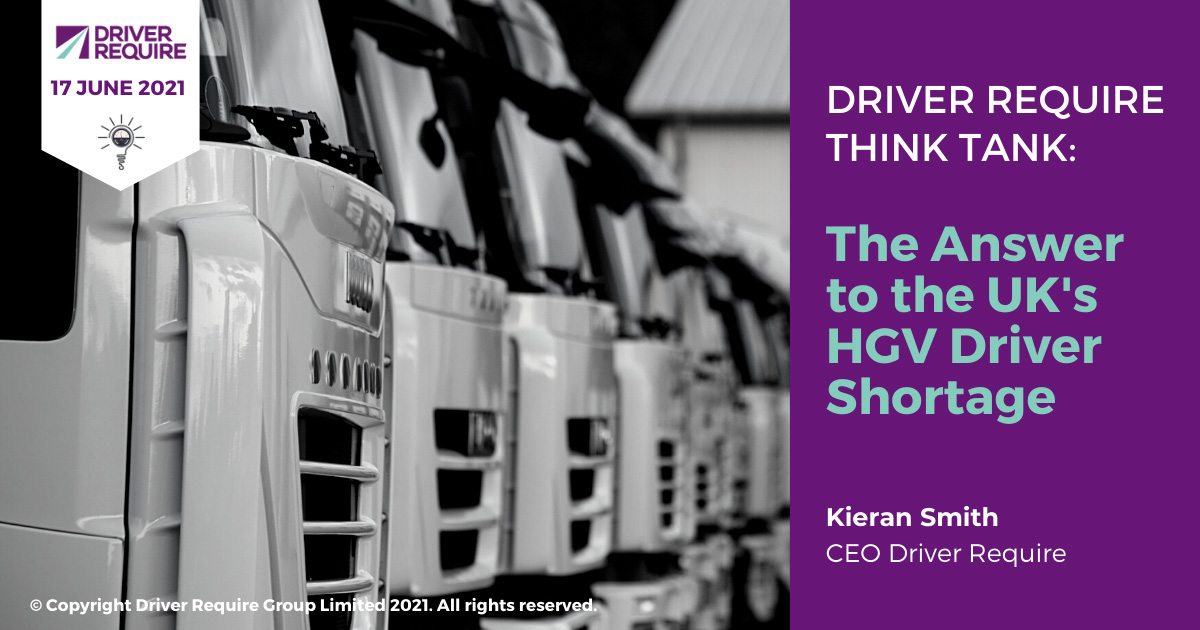 Read our latest report in our series “The UK’s HGV Driver Supply Shortage”. Kieran Smith, our CEO warns, “Brace for impact” on the chronic driver shortage the UK is currently facing. 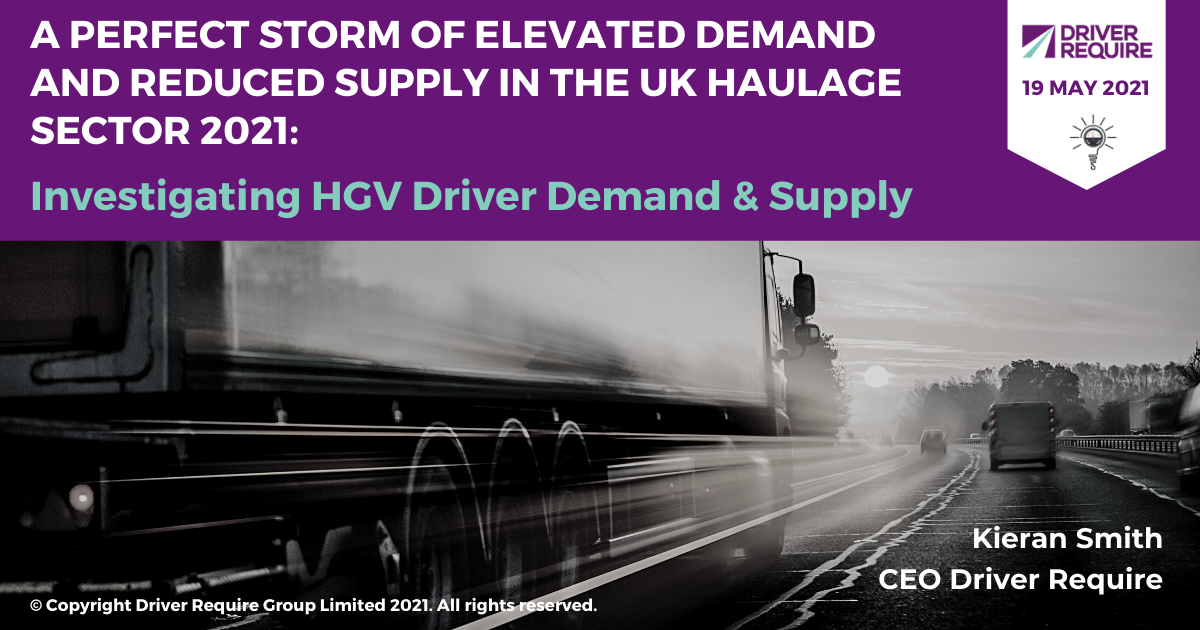 Driver Require has been tracking the UK's HGV Driver Shortage Crisis for a number of years prior to the Coronavirus outbreak and then more closely as we progressed through the pandemic. Read our previous White Papers and Reports below...

The shortage of LGV drivers in the UK is heading towards crisis point… and there’s very little we can do to stop it.

Following the recent publication and press coverage of our IR35 White Paper and IR35 Action Plan, we have published a further industry report detailing the current and prospective state of the LGV driver market. It also investigates the UK’s LGV Driver Shortage and warns of an impending “perfect storm” of conditions that will likely bring the shortage of LGV drivers to crisis level unless rates of pay and working conditions are rapidly improved.

This White Paper primarily focuses on:

According to the report, the shortage of LGV drivers has been growing steadily over the past ten years. Demand is currently estimated at 370,000 drivers with only 320,000 currently working in the sector, leaving a shortage of 50,000.

To date, the UK has been able to avoid this shortage becoming critical due to a combination of recession and Eastern European immigration, which alleviated increasing demand, but Driver Require fears the situation could rapidly worsen due to impending regulatory changes.

Driver Require’s CEO, Kieran Smith, explains: “For the first time since 2005, we have increased LGV driver requirements with no continental EU nationals to make up the deficit. Meanwhile, the UK has become a less attractive place to work for foreign LGV drivers due to a “perfect storm” of conditions: the culmination of Brexit, the associated drop in the exchange rate and the government’s crackdown on limited company operators via the IR35 legislation, which comes into effect in April 2020.”

Our report explains how the implementation of IR35 in the Private Sector in April, exacerbated by Brexit, could trigger an exodus of foreign drivers to Germany and BeNeLux countries for better pay and conditions, while British drivers may leave to pursue other careers. The result could be a rapid worsening of the LGV driver shortage to crisis point which, in the short term, would inflate LGV driver pay to unprecedented levels.

The only way to avoid a short-term crisis will be for the haulage operators to accept increased agency charge rates so that agencies can pass the uplift on to the agency drivers to prevent them returning to continental Europe or quitting driving in favour of other jobs.

Kieran Smith explains, “The problem with this is that the government is unlikely to help increase salaries and benefits to LGV drivers, while HMRC is working hard to go the other way by closing the Ltd Company loophole and forcing payment of taxes. Meanwhile, haulage companies are under extreme margin pressure from their customers and agencies are also under pressure following 10 long years of having their margins squeezed by their haulage customers.

“If IR35 is implemented in April, we can assume that few hauliers will want to accept an increase in agency charges, so we can foresee agency LGV driver net pay falling and an exodus of thousands of foreign drivers to continental Europe.”

In the short term, if the driver shortage worsens as we suggest it might, pay rates will be inflated above the market rate until enough drivers return to the market to restore supply. The effect will be a disruption to the supply of goods and over-inflated costs to hauliers, which will inevitably be passed on to the end consumer.

But Driver Require warns that, even if higher agency rates are agreed in the short term, the systemic issue of an overall shortage of LGV drivers can only be addressed by sustained improvements to remuneration and working conditions which are sufficient to attract qualified LGV drivers back onto the road.

Kieran Smith says “Driver Require calls for the HMRC, Government and Regulators to rigorously enforce the IR35 legislation to discourage rogue operators undermining ethical players and to quickly create a level playing field. By accepting the inevitable increase in agency pay and charge rates, we hope to avoid a potential short-term driver supply shortage triggered by an exodus of LGV drivers from the UK haulage sector.”

Smith continues “In the longer term, we appeal to the authorities to drive improvements to LGV driver working conditions both in the haulage companies and on the UK road network. Meanwhile, we expect that market forces will maintain higher pay rates for LGV drivers, which in turn should result in greater retention and an easing of the supply shortage.”

The LGV Driver Shortage will remain unresolved and may, in fact, worsen, despite reductions in demand due to COVID-19.

In our latest Report titled “The Impact of COVID-19 - A Roadmap for Recovery in the UK Haulage Sector”, released in early July, our CEO, Kieran Smith, made the bold statement that there will no longer be an LGV driver shortage in the UK; at least not until we are fully out of the post-COVID-19 recession. We now believe that the LGV driver shortage will remain unresolved and could potentially worsen, at least in the short term.

Driver Require's Report concluded that the predicted drop in GDP due to the impact of COVID-19 could cause a 10% reduction in LGV driver employment numbers (approximately 30,000 drivers) for the next couple of years. This would, in theory, help offset the perceived pre-COVID-19 shortage of over 50,000 LGV drivers, but other factors are at play with the potential to reduce the available LGV driver pool beyond the drop in demand. It’s also possible that the timing of these factors could combine to exaggerate conditions.

In our previous white-paper that detailed the Driver Shortage (below), we established that the UK needs to maintain a flow of 40,000 new entrants (new LGV passes) to keep the driving pool at its current level. But Lockdown has seen the flow of new passes dry up, and it doesn’t appear that DVSA testing facilities will be operating above 50% capacity until a vaccine is deployed (currently forecast for the end of Q1, 2021).

Kieran explains in the bulletin: “Due to lockdown and capacity restrictions at testing sites, we have effectively “lost” over 16,000 new passes so far. If the training and test capacity continues at around 50% until a vaccine is successfully deployed, we “lose” another 14,000 new passes, bringing the total to about 30,000.”

This lack of newly qualified drivers, along with timing-associated factors, will cause demand to continue to exceed supply and that the current perceived LGV driver shortage will continue through to the end of 2020, getting more pronounced through the Christmas peak period and is likely to rear its head again when the LGV market stabilises in the second half of 2021.

“At best, the UK LGV driver shortage might improve (the deficit will decrease) by around 10,000 drivers, but this assumes that the foreign drivers remain working in the UK. This is an optimistic assumption given the mounting factors likely to alienate them: Brexit, the new immigration rules, IR35 reform and on top of all this: COVID-19. We only need a quarter of these foreign drivers to leave to completely eliminate any easing of the shortage caused by the COVID-19 recession.”

Driver Require is enlisting the support of industry experts and academics to try and get greater clarity on factors used to make their calculations, so they can more accurately predict the extent of the problem. In the meantime, it is difficult to see the LGV driver shortage diminishing significantly and, if anything, it could worsen periodically over the coming 18 months unless there is determined Government intervention.