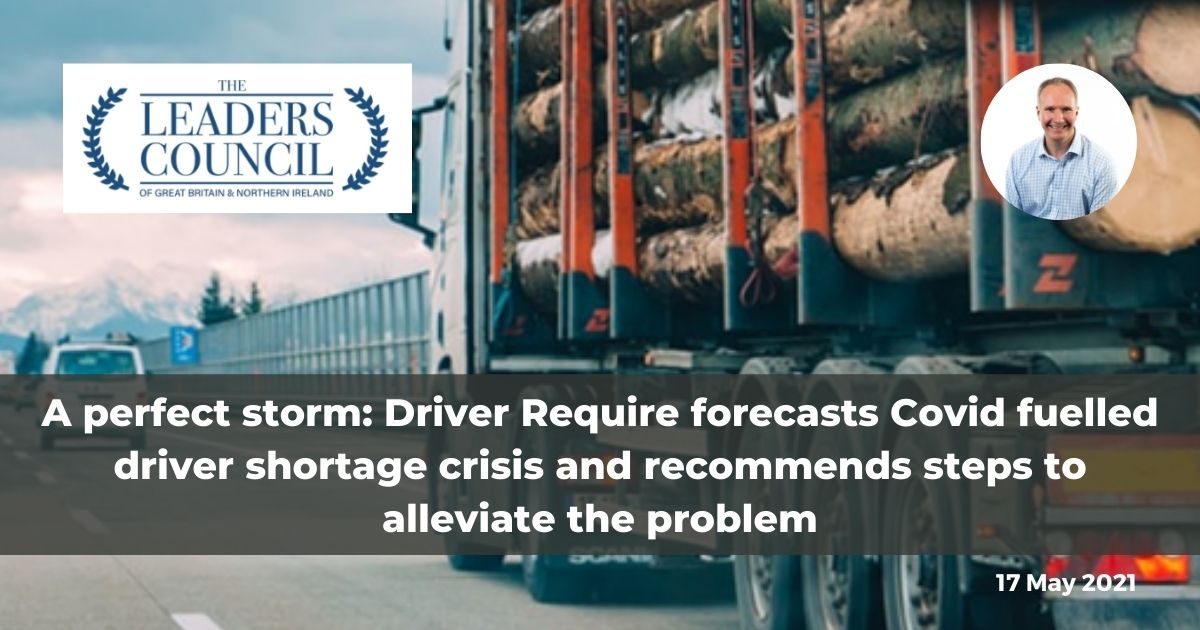 Independent commercial driver recruitment agency Driver Require has been keeping a close eye on the UK’s HGV driver shortage problem for several years. As the nation has also been forced to grapple with the impact of the Covid-19 pandemic, the firm has compiled its thinking and conclusions on what is likely to come of this shortage in the future and the impact it will have on the UK haulage industry.

In summary, the unprecedented events of the pandemic will impact the supply and demand for HGV drivers and most likely culminate in a driver shortage crisis over the coming months, according to Driver Require CEO Kieran Smith.

Smith says: “As a supplier to the haulage sector, Driver Require is already experiencing a significant increase in demand and a scarcity of quality drivers – and this is only May 2021. As the lockdown restrictions are lifted, we can expect an increase in freight volumes, while permanent drivers will take long-overdue holidays over the summer period, leading to a significant jump in agency HGV driver requirements.

"As a temporary recruiter, we are at the coalface of the impending, predicted crisis but it will be our clients and ultimately businesses and consumers who rely on the movement of goods across the UK who will pay the greatest price. We believe that, as a sector, we have a responsibility to take action and alert the wider community to the possibility of a driver shortage crisis. We need to raise the profile of this issue, dispel common perceptions and provide industry key influencers and decisionmakers the opportunity to act to secure the UK’s economic recovery.”

To map the likely effects of this shortage of drivers more accurately on the haulage sector, Driver Require formulated a Think Tank involving representatives from the Recruitment and Employment Confederation, Logistics UK, the Trailblazer Group for Transport & Logistics, Road to Logistics and Think Logistics, as well as a range of haulage and distribution operators ranging from FTSE 100 companies to SMEs. Leaders from logistics statistics experts, national haulage fleet hire suppliers and an established LGV training school were also involved. The Think Tank then collaborated on a joint report which predicts a “perfect storm” of increased demand and shortage of HGV drivers, leaving the industry in turmoil.

This of course begs the question as to how such a crisis is likely to materialise. Although the UK is widely forecast to enjoy a strong economic recovery in the latter part of the year, the Think Tank concluded in its report that haulage activity has already returned to pre-pandemic levels, with demand there at present for approximately 300,000 HGV drivers. These levels of demand are only likely to increase through the remainder of the year as the economy reopens further. The report also anticipates that further pressure will arise from HGV drivers taking time off over the school summer holiday period.

Smith adds: “Our Think Tank noted that, prior to the Covid-19 pandemic, the haulage sector was already suffering from a chronic low-level shortage of HGV drivers that became severe in times of rapid uplift in requirements or during seasonal peak demand. It also observed that the sector had relied heavily on EU HGV drivers to avoid a supply crisis in the event of a rapid increase in demand.

The group explored the likely impact of Covid-19 on the supply of HGV drivers, and its conclusions did not bode well.

Smith explains: “We concluded that the ‘most likely’ scenario was a 22,000 - or seven per cent - drop in HGV driver supply since the start of the pandemic, with a "worst case" scenario drop of 30,000 or ten per cent.

“This drop in supply has been caused by a number of factors. Firstly, there has been a reduced inflow of new HGV drivers due to restricted HGV training capacity during lockdowns. Secondly, there was an increased outflow of drivers thanks to some going into retirement, EU HGV drivers leaving the UK because of Covid and the implementation of IR35 reforms in the private sector, and then some were simply so sick of poor pay and working conditions that they moved into other industries and sought alternative careers.”

All in all, the Think Tank’s analysis concluded that the ‘most likely’ impending deficit position of drivers will be a shortage of 22,000 personnel, which could rise to 50,000 if demand continues to exceed expectations.

Smith also believes that the government’s new points-based immigration system enacted after Brexit is likely to prove another barrier to alleviating the issue and therefore a potential impediment to the economic recovery at large.

“The new immigration system effectively bars EU drivers coming to the UK to offset this deficit, leading our Think Tank to conclude that this could be the first time in 20 years that we may experience a true HGV driver shortage, along with potentially serious consequences for the UK economic recovery.”

Despite the looming crisis, the report is not entirely doom and gloom. Smith and the Think Tank go on to suggest a range of ways that the issue could be combatted, primarily by increasing the capacity for HGV driver training, attracting UK HGV licence-holders who have left the industry back into a driving career, and finding ways of fast-tracking EU-based HGV drivers into the UK industry again and allowing them to work and offset the issue.

Discussing some of the proposed solutions, Smith says: “There are several ways that we could try to up our HGV training capacity, but one of the most effective that industry operators could engage in would be to approach the DVSA and the Department for Transport and urge them to take action.

“We could also seek to leverage surplus HGV training capacity within the Ministry of Defence and make use of their resources, as well as supporting efforts from the Trailblazer Group for Transport & Logistics by lobbying for a new HGV Driver Category C+E Apprenticeship. The aim is for this new apprenticeship to come with a funding level of £7,000, rendering it more accessible.”

Elsewhere, the report also recommends that a thorough survey of UK HGV licence-holders is conducted to accurately map whether they are still active in the industry, and if not, ascertain why they have left the HGV driver pool.

Once some of the principal motivations for leaving industry have been established, Smith recommends that steps can be taken by the industry and government in tandem to reduce churn and to make it easier for people to return to the industry and address the skills shortage.

“A government subsidy of CPC and refresher HGV training courses is something that we discussed as part of our solutions, which would make it more attractive for returning personnel to bed back into the industry.”

With regards to the third solution of increasing access to HGV drivers from the EU, the report highlights that the government’s new immigration law prohibits HGV Drivers from being considered a “Shortage Occupation”, since this category of worker does not meet the minimum education level of RQF Level 3.

Smith and his fellow experts believe that, despite the formidable obstacles, it may still be worth lobbying government to include HGV drivers on the shortage occupation list, in the event that other means of attracting candidates are too slow, or fail entirely.”

But even if all three mitigating solutions are implemented, is it likely to tangibly resolve the shortage problem?

The short answer to this question coming from the report is “no”, at least in that it will have a limited effect in the short term. Yet, this does not detract from the fact that these initiatives should be progressed as quickly as possible if they are to have any chance of mitigating the medium to longer-term impact of the shortage crisis, in Smith’s view.

He says: “Our Think Tank recognises that the impending HGV driver shortage crisis is rapidly worsening and that many of its recommended actions may have limited short-term impact. Nevertheless, it is important that these initiatives are progressed as quickly as possible if they are to have any chance of mitigating the impact of the shortage crisis.

“In the meantime, the effect of an HGV driver shortage will be that hauliers and their temporary driving agencies will be competing for a diminishing pool of available drivers, which in turn will push up driver pay rates, initially in the agency market and then eventually in the permanent workforce.

“The effect of elevated pay rates will at least have the benefit of hopefully attracting HGV licence holders to return to driving, thereby helping to alleviate the shortage. However, it appears highly likely that we will be forced to ride this storm out and bear the financial pain until the HGV driver market stabilises.”

Read the full article by Scott Challinor, The Leaders Council