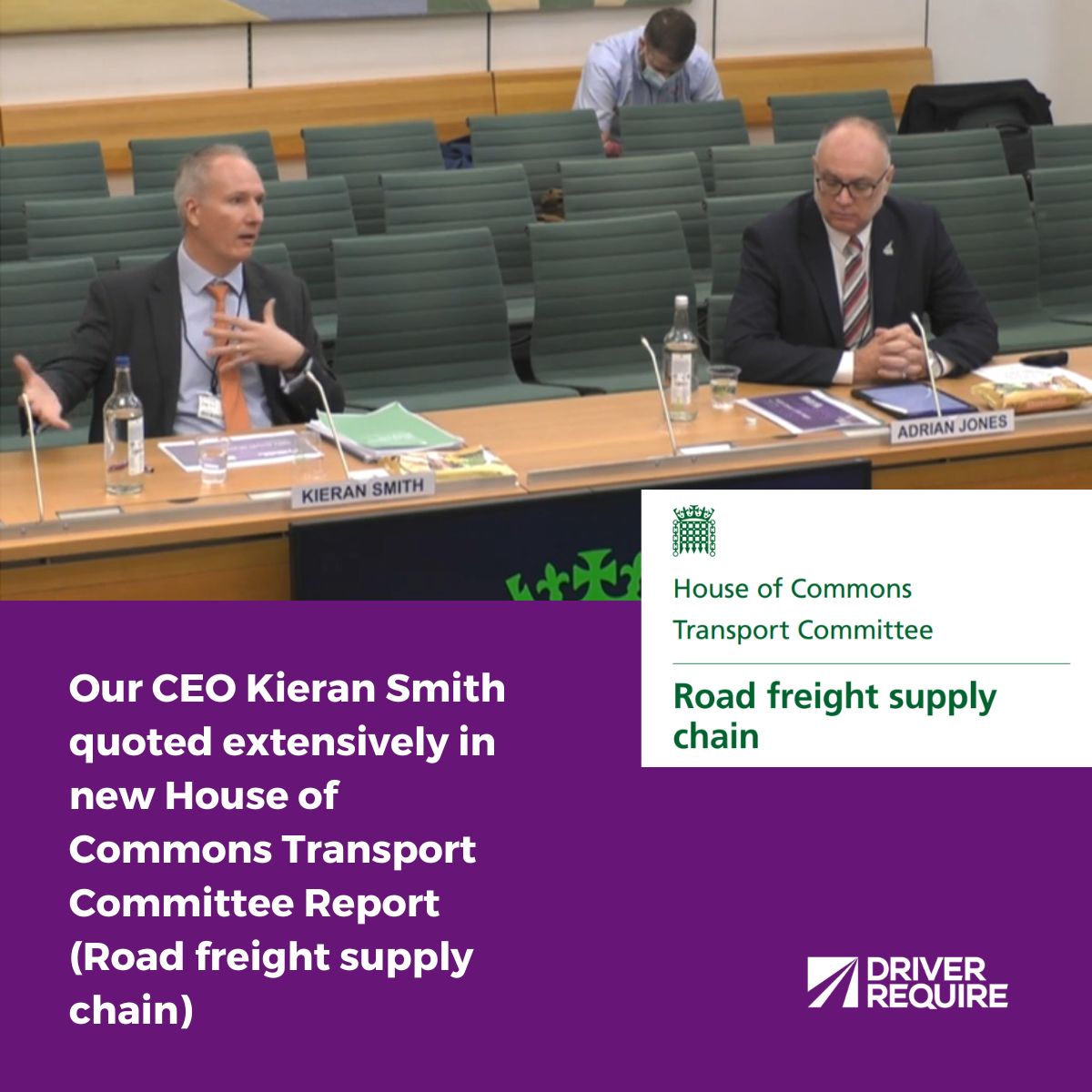 In December last year, our CEO Kieran Smith gave evidence at the House of Commons Transport Committee inquiry, which was set up to examine the challenges facing the road freight supply chain.

Since the most severe covid-19 restrictions were lifted, the logistics sector was unable to fully supply essential goods to the UK’s supermarkets, petrol stations and other marketplaces. At times, motorists were unable to fill up their tanks with fuel and shelves were bereft of food. A labour shortage in the logistics sector, exacerbated by an ageing workforce and record job vacancies across many other sectors in the UK economy, made it challenging to retrain and recruit personnel.

The report, and its recommendations, seeks to overhaul the logistics sector and ensure that the supply chain, and its workforce, is more robust and resilient.

Highlights from the Report include:

Effect of the covid-19 pandemic:

The pandemic, … exacerbated the existing shortage of HGV drivers. Logistics UK said that “over the past two years [the shortage] has deteriorated from chronic to acute”.6 The Department blamed disruption to vocational testing and increased demand as the economy improved as well as “underlying structural challenges”.7 Kieran Smith, Chief Executive of the recruitment agency Driver Require, said “the majority of it was down to the over-45-year-olds leaving in their droves. We are talking about over 50,000 who left at the beginning of this year in Q1 [2021]. That is what triggered the crisis”.8 He also attributed some of the shortage to “IR35, Brexit and other factors”.9

Between July 2021 and February 2022, the Department temporarily relaxed the regulation of drivers’ hours…..Many witnesses opposed the relaxation. The Chartered Institute of Transport and Logistics (CILT) said that it placed “more pressure on an already stretched workforce”. The Minister argued that reaction to the change had been “overblown”, because few operators had sought to use the extension and it provided “no diminution in the overall amount of rest” drivers must take.28 Adrian Jones, National Officer for Road Transport for Unite, described the relaxation as “a moot point” compared with wider problems with the regulation of drivers’ hours.29 Kieran Smith, Chief Executive of Driver Require, criticised the regulations as “mind-bogglingly complex” and called for them to be simplified.30 The Minister agreed that the system had problems, with too many employers seeing the limits as targets.31

Our witnesses told us that the sector was not doing enough to keep its workers, especially HGV drivers. Jim French MBE, Co-Chair of the Transport and Logistics Trailblazer Group, said that “the issue is a lot more about retaining the drivers we train rather than trying to keep topping up the bucket when we have a big hole in the bottom”.61 Kieran Smith, Chief Executive of Driver Require, said this was due to pay and conditions: “The nature of the job is that the majority of the hours are antisocial and unpredictable [ … ] When you get to a point where you wish to start a family you end up with a bit of a conflict because the wages to date, up until this year, have not been sufficient for a driver to be the primary income earner for a family unit.62

One driver, whose experience was similar to others we spoke to, told us “I don’t have a life. I work 11 hours a day, try to sleep, and then go back out to work again”.63

Kieran Smith argued that drivers’ salaries had been depressed for the last 10 to 20 years, because “we have a highly fragmented haulage market” and “powerful, consolidated buyers dominated by the grocery sector and the high street retail sector”.74 He explained that this was exacerbated by the “outsourcing of labour to agency”, whereby “the Government and HMRC essentially tolerated the avoidance of tax”.75 Tesco said roughly 79% of its drivers were its employees and 21% agency staff.76 In April 2021, new off-payroll working rules (IR35) were implemented that have made such outsourcing less attractive.

Set against the many small employers in the logistics sector there are a small number of powerful buyers from the grocery and high street retail sector.132 Jim French MBE, Co-Chair of the Transport and Logistics Trailblazer Group, argued that “logistics sector operators are probably a much smaller voice than the large retailers” when, for example, new regulations in the sector are agreed.133 Kieran Smith, Chief Executive of Driver Require, told us “you have very aggressive, fragmented hauliers fighting for the business and very strong buyers [ … ] they are going to push down on conditions, which cost them money, and wages”