IR35 and the LGV Industry

What does it mean for the LGV sector: drivers, hauliers and agencies? 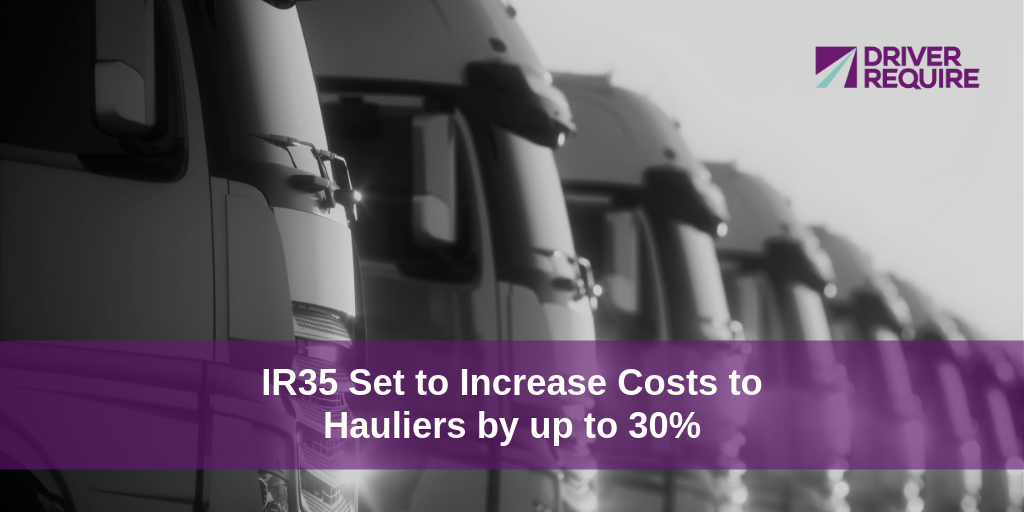 Many of you will be aware that the Government has confirmed its intention to continue rolling out the IR35 legislation to the Private Sector next April (2020). Simultaneously, the Government will repeal the Agency Worker Regulations (AWR) “Pay Between Assignments” (PBA) contracts. But what exactly does this mean for the transport & logistics industry?

Our CEO, Kieran Smith, has been researching exactly that — paying particular attention to what the implications will be for hauliers who use agency LGV drivers, the agencies who are currently supplying them, and for the drivers themselves.

Over the last decade, the Government has effectively subsidised agency labour costs by around 20% by permitting the use of Ltd Companies by agency workers who, under the IR35 legislation’s definition, should be employed as PAYE workers.

As a result, over the past ten years or so, agency workers have been disproportionately cheap compared to full-time employees, especially when it comes to blue-collar workers earning between £25,000 - £40,000 per annum.

These savings on direct employment costs, coupled with lower Industrial and Human Relations administration and reduced reputation risks, has led to the larger hauliers replacing their full-time staff with agency workers. They have not only outsourced the variable element of their workforce but also their “standard operations”, while their agencies have taken on such a large quantity of stable work that they’ve been able to drop their margins by up to 10%, further reducing the labour cost, per worker, to the end client.

The introduction of IR35 to the Private Sector is going to turn the current system on its head; effectively raising agency labour costs by up to 25%, which will raise the cost to the end client by around 20%. This is essentially a tax on agency users that goes entirely to the government; neither the drivers nor the agencies will benefit from the charge rate increases.

What this means for Hauliers:

Hauliers will review their agency needs in light of the higher charge rates and will rebalance the size of their agency driver pool. The biggest impact will be on the large volume operators who have outsourced their “standard operations” to agencies and who will most likely bring their "standard operations" labour needs back in-house — substantially reducing their agency workforce to just what's needed to cover variability. These large operators will therefore not only see a 20% hike in their agency charge rates but will also lose their volume discount, meaning that they will be looking at a combined increase in agency rates of up to 30%.

What this means for Agencies:

With hauliers moving their core driver pool back in-house, we expect to see a reduction in the number of agency LGV drivers, with large volume, low-margin agencies returning to the traditional model of catering for clients’ variable and seasonal requirements.

The repeal of the AWR PBA contracts will force agencies to pay their workers parity rates, which should encourage an “open book” relationship with their customers. This reinforces transparent commercial relationships between agencies and their clients and should lead to a level playing field.

What this means for Drivers:

Operators who ignore the change in legislation and continue to use Ltd Company contractors who fall under IR35 risk being disciplined and could ultimately lose their Operator's Licence. Reputable operators will, therefore, insist agency drivers be employed as PAYE workers, regardless of the cost implications.

This means that most blue-collar agency drivers, currently operating as Ltd Companies, will be forced to migrate to PAYE.

If agency charge rates remained static and we incorporated all the additional costs associated with a PAYE employee, then the net pay to these drivers would drop to an unacceptable level — far below what they were earning as a Ltd Company contractor.

The only way to prevent drivers leaving the agency workforce will be to maintain the same net income as they were receiving as Ltd Company contractors which will result in an approximate 20% increase in the overall charge rate for agency drivers.

What this means for the sector as a whole:

Ultimately, the changes will disable larger agencies from dropping their margins and undercutting small to medium-sized agencies through providing high volumes of Ltd Company contractors for standard operations, when these drivers should be employed as PAYE workers.

Enforcement of the IR35 legislation and the repeal of AWR PBA contracts should result in a level playing field where ethical & specialist agencies can compete fairly, growing their market share by providing superior services.

Our key concern is that the regulators, HMRC and the government do not rigorously enforce the IR35 legislation, tempting all parties to exploit tax avoidance methods to suppress costs.

We could find ourselves in a marketplace where the unethical and unscrupulous operators have a competitive advantage over professional, ethical agencies — ultimately damaging the entire sector and the haulage industry as a whole.

The more strictly the legislation is enforced, the quicker the transition to a stable and fair marketplace, which will be beneficial to all of us.

If you’re interested in learning more, our IR35 White Paper tackles each of these talking points (and more) in detail, thoroughly outlining the impact the rollout of the new legislation is going to have on our sector.

We always welcome your thoughts and input, so please feel free to get in touch and join the conversation!