Why self-employment has become a taxing issue for HGV drivers 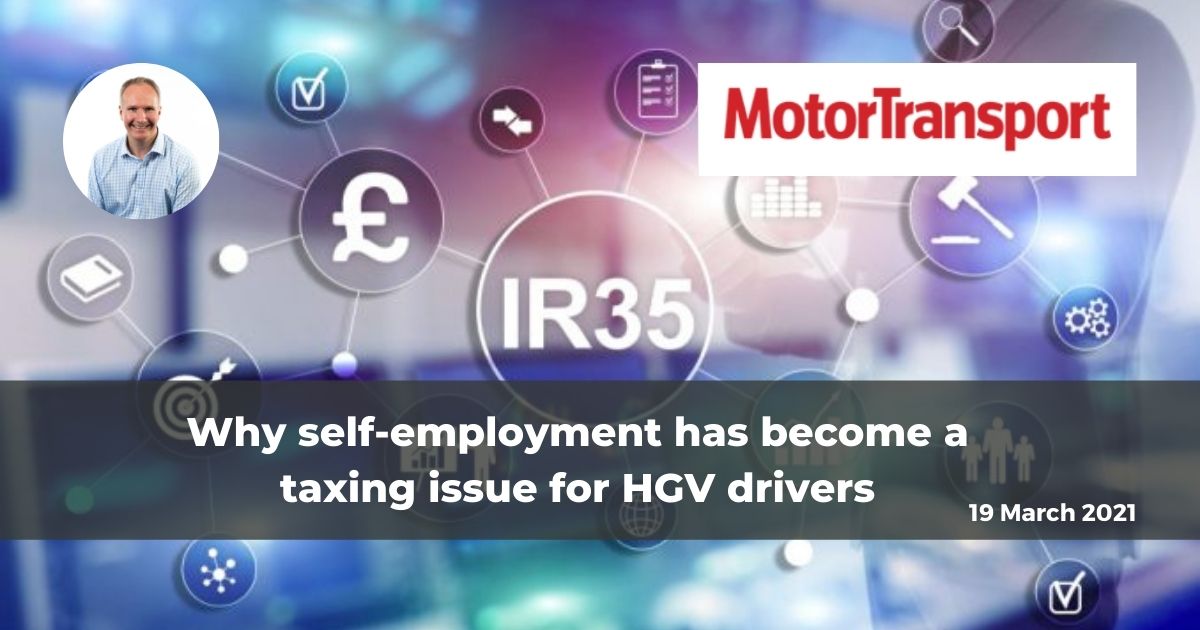 What will be the impact of new tax regulations on hauliers, self-employed drivers and wage rates when they are introduced in April?

As hauliers battle against the impact of the Covid-19 pandemic, the government is preparing to throw another challenge into the mix.

Updated tax rules, which were delayed last year as the pandemic hit, are set to be introduced in April, bringing with them some of the most significant changes to haulage working and employment practices in decades.

From 6 April 2021, large and medium-sized haulage companies – with net turnover of above £10m or employing 50 or more staff – will no longer be able to hire drivers who work as limited companies. Instead, drivers will need to be employed as a PAYE (pay as you earn) worker, either by the haulier, the agency or via an umbrella company.

The changes make it easier for HMRC to prevent tax evasion by switching the onus from the limited company driver to the end client, who must ensure their agency worker is employed within the rules and will be responsible for any underpayment of tax by the driver.

The end client or agency also becomes responsible for deducting the relevant tax and National Insurance contributions at source.

Kieran Smith, CEO of specialist driver recruitment agency Driver Require, calculates the new rules could add 20% to the cost of employing an agency driver and prompt employers to bring drivers back in-house, only using agency drivers to cover variability.

He welcomes the move, and says his business has always catered for variable, specialist work, rather than as a provider of cheap outsourced labour.

“We expect most professional blue-collar agency workers will migrate to PAYE, resulting in a level playing field where ethical and specialist agencies can compete fairly, growing their market share by providing superior services,” Smith said.

He warned that any attempt to recover additional labour costs by depressing drivers’ wages will only exacerbate the driver shortage.

“Over 15,000 of 40,000 EU drivers have returned to the EU since the pandemic, of which around 30,000 are agency workers. That underlying shortage will soon manifest itself as the economy recovers,” Smith continued. “My advice to operators is start budgeting for rising labour costs now and assume these will be 20% higher than at present.”

HMRC is not the only government agency taking a dim view of the use of self-employed drivers.

The Office of the Traffic Commissioner (OTC) has been cracking down on operators’ use of self-employed drivers for some years.

Its latest annual report warns: “IR35 is designed to tax disguised employment at a rate similar to employment – drivers and operators need to review their employment status as a matter of urgency and ensure they have the level of control required to deliver the operator licence requirements.”

The TC’s written decision, upheld on appeal, noted the owner “had no power to give to his drivers any instructions on which route was required to be taken by them, if they were to be regarded as having their self-employed status”.

He added this reliance on “purported self-employed contractors” was against the current advice from HMRC and led to the bridge strike.

TCs may also report non-compliant companies to HMRC. One small haulier using self-employed drivers was recently subject to an HMRC investigation that stretched back six years and landed him with a tax bill of £20,000, which was negotiated down from an initial £50,000.

Jonathon Backhouse, a partner at transport law firm Backhouse Jones, said the case illustrates that hauliers of all sizes using self-employed drivers are at risk of scrutiny.

“Larger firms have been bringing their drivers in-house in anticipation of these new rules for some time,” he said. “Smaller firms have not, since they’re outside IR35 rules. But if they cannot prove to the OTC their drivers are genuinely self-employed, then their reputation is at stake. My advice to smaller operators is to comply with IR35 regardless of their size.”

Kieran Smith said smaller companies will struggle to find limited company drivers after 6 April, regardless of being outside IR35, as many will migrate to PAYE.

Jonathon Backhouse also urges hauliers to avoid looking for a loophole: “There are operators with swathes of drivers provided by pseudo agencies, often owned by the same firm. But these arrangements will not stand up to scrutiny by the TC. These operators often think its fair game and have absolutely no idea they’re risking their licence, but scamming the government out of taxes is an issue of repute.”

The risk is that in response some drivers will disappear into the black market or hauliers could resort to zero-hours contracts.

“If the regulators, HMRC and the government do not rigorously enforce the IR35 legislation, it will tempt all parties to exploit tax avoidance methods to suppress costs,” said Smith. “We could find ourselves in a marketplace where the unethical and unscrupulous operators have a competitive advantage over professional, ethical agencies – ultimately damaging the entire sector and the haulage industry as a whole.

“The more strictly the legislation is enforced, the quicker the transition to a stable and fair marketplace, which will be beneficial to all of us.”

Read the full article in MotorTransport